Saturday brought us to Split, Croatia and another gorgeous day in the Adriatic. We had booked a tour through Urban Adventures, which means paying your money and taking your chances with the quality of a guide. We hit the jackpot in Split and had an excellent guide for our day, Senka Vlahovic, but as you will see in a couple days it really is luck of the draw.😰

We left the ship with another couple and allowed more than enough time to make it to the meeting point because we weren’t sure about the walk or exactly where we were to meet.  We were docked right next to the bustling ferry terminal.

I had e-mailed Urban Adventures before the trip and gotten a map pinpointing the meeting location, so I thought there was no chance of messing up.

We used Google Maps, the e-mailed map, and GPS to find what we THOUGHT was the correct meeting location and proceeded to wait. Time passed and there was no sign of a guide or even anyone who looked like they might be a guide! A quick look around and we discovered there was another site about 50 feet away that also fit the meeting description, and it was there that we found our guide. We really enjoyed our day, but Urban Adventures needs to do a better job with helping unfamiliar visitors find meeting locations. As you will see in a few days, there isn’t always a happy ending!

Wow! Only two paragraphs in and two things to watch out for later in the trip! I must want you to keep reading!😁

Our tour was called Secrets of Split, and it revolved around Diocletian’s Palace, which is the center of the old city. The well-preserved palace and ruins date back to the beginning of the Fourth century A.D. and were built by Emperor Diocletian for his retirement home. The structure is massive, covering seven acres! About half of it was for Diocletian’s personal use, and the remainder housed the military and servant staff.

At the time it was built, the sea provided the protection for the south wall of the palace, and that was where supply boats came as well as where the most important structures were. It is also believed that the emperor wanted direct access from the sea to the palace.

The three sides of the palace facing land had more solid walls, turrets, and heavy gates, but the south wall featured a series of arches behind which was an arcade. It was in the southern half of the palace where the emperor’s public and private apartments and all religious buildings were located.

The palace was abandoned with the fall of the Roman Empire, and remained vacant until the seventh century. It has been occupied continuously since that time, with residents establishing their homes and businesses in the palace’s substructures, open spaces, and in the walls themselves. The palace today is considered to be the best remaining example of a Roman palace because of its excellent degree of preservation.

The above history lesson was brought to you courtesy of our wonderful guide Senka, with a memory assist from Wikipedia and Rick Steves!😂

Back in Diocletian’s day the sea reached the south wall of the palace, and access was by boat. Over the centuries the sea has receded, and there is now a vibrant Riva (or promenade) just outside the palace walls. The Riva is lined with shops, bars, and cafes that are within the lower exterior walls of the palace, and vendors of all kinds set up stalls in the Riva on the weekends and for festivals. It was there that our tour began with a look at a diagram of the palace as it was and an explanation of its history. Standing in the Riva looking towards the palace, you can see the remains of the south wall with newer (post Roman Empire) structures built on top of and behind the wall.

Here is an artist’s rendering of the palace as it was in the time of Diocletian: 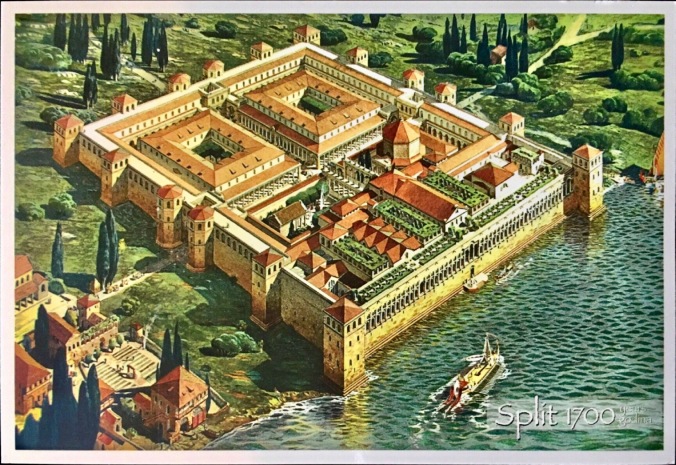 The south wall of the palace today:

Stock picture from the internet (it was incredibly crowded on the Riva the day we visited because of the Festival of St. Duje, Split’s patron saint):

We entered the palace through the old south gates and found ourselves in the gigantic Grand Hallway that leads from the gates to the Peristyle (the center of Split, in the area of the palace where Diocletian’s chambers were located). To either side of this grand hallway are the excavated substructions of the palace. Excavation of these basement halls has revealed the original floor plan and layout of Diocletian’s residential quarters. This area was fascinating to explore. The architecture is quite remarkable, and excavation has uncovered evidence of structures on the site that predate the palace.

The next three pictures are from the pamphlet you get as you (pay to) enter the basements: 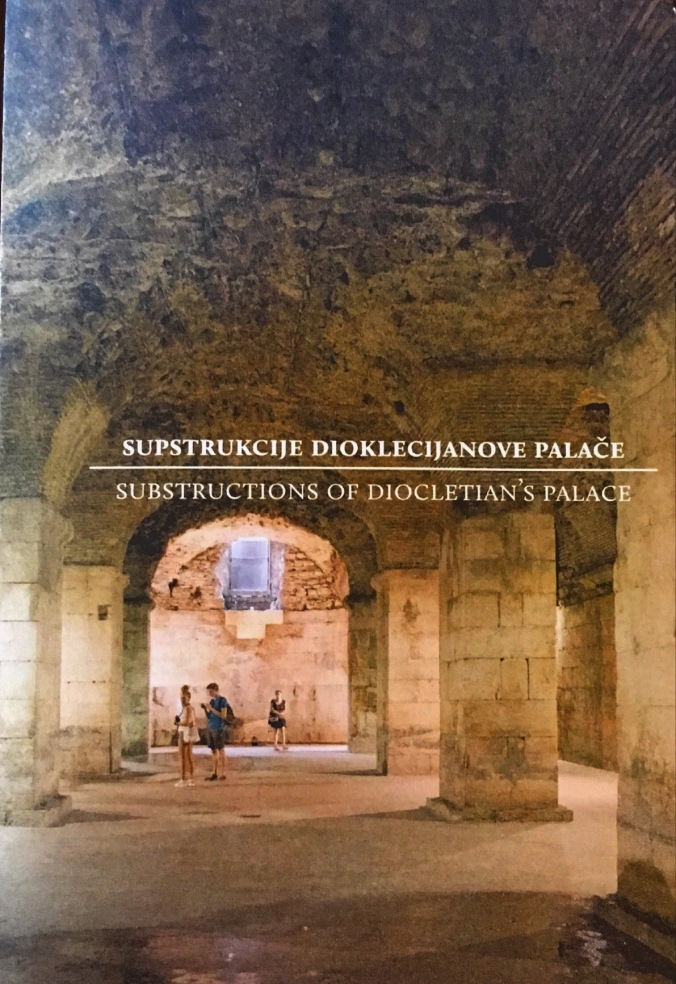 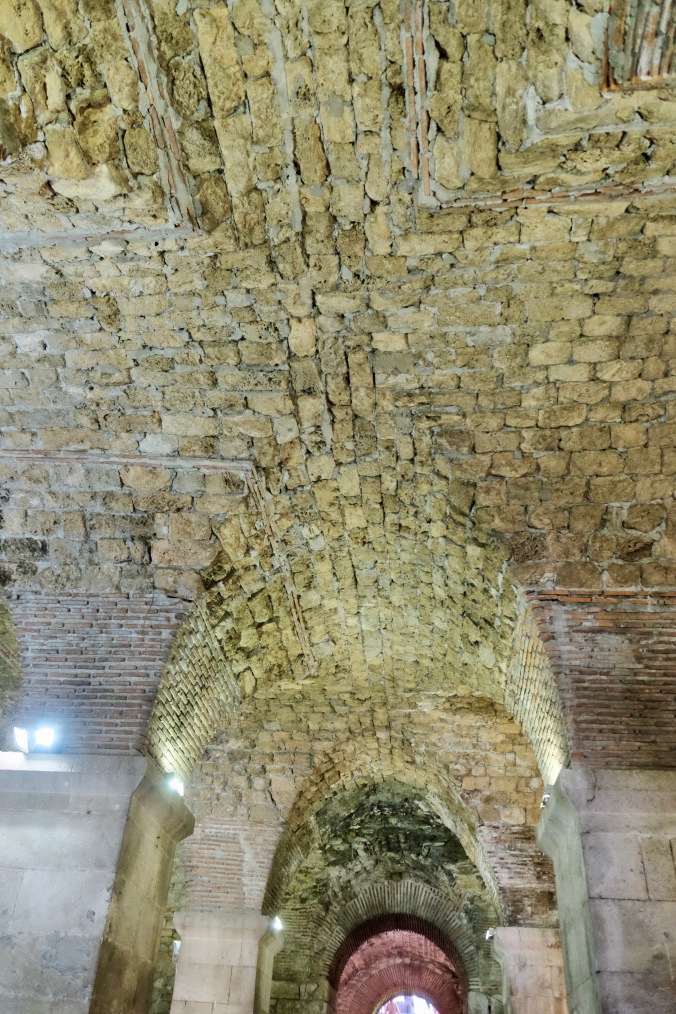 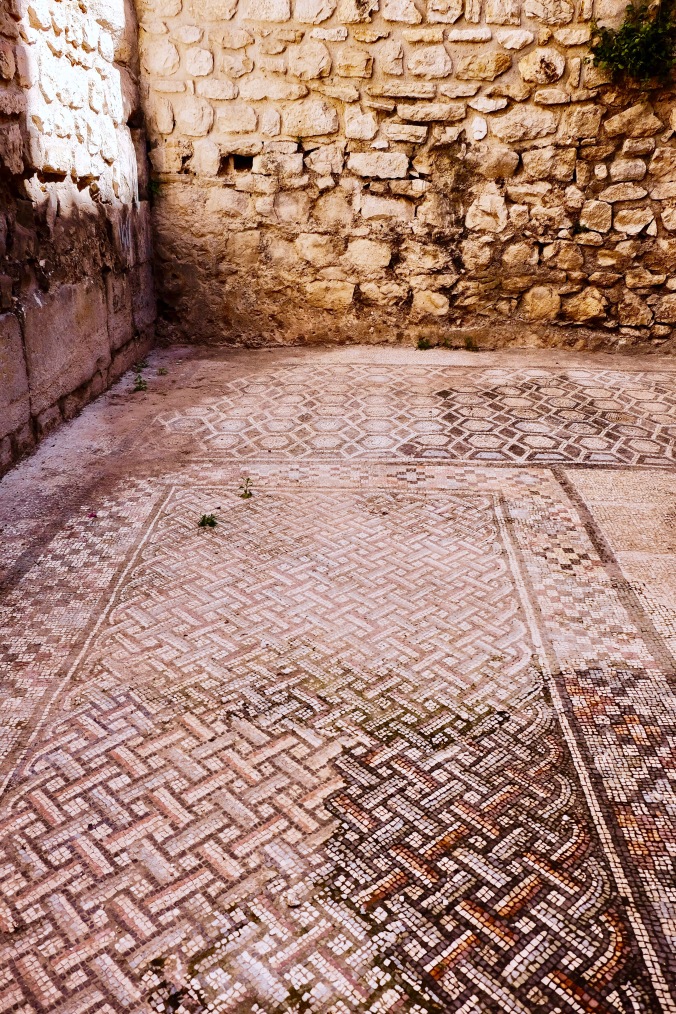 In this picture, you can see where the outer wall of the palace actually forms the back wall of a bar/café on the Riva. They are using the palace window opening for shelves! 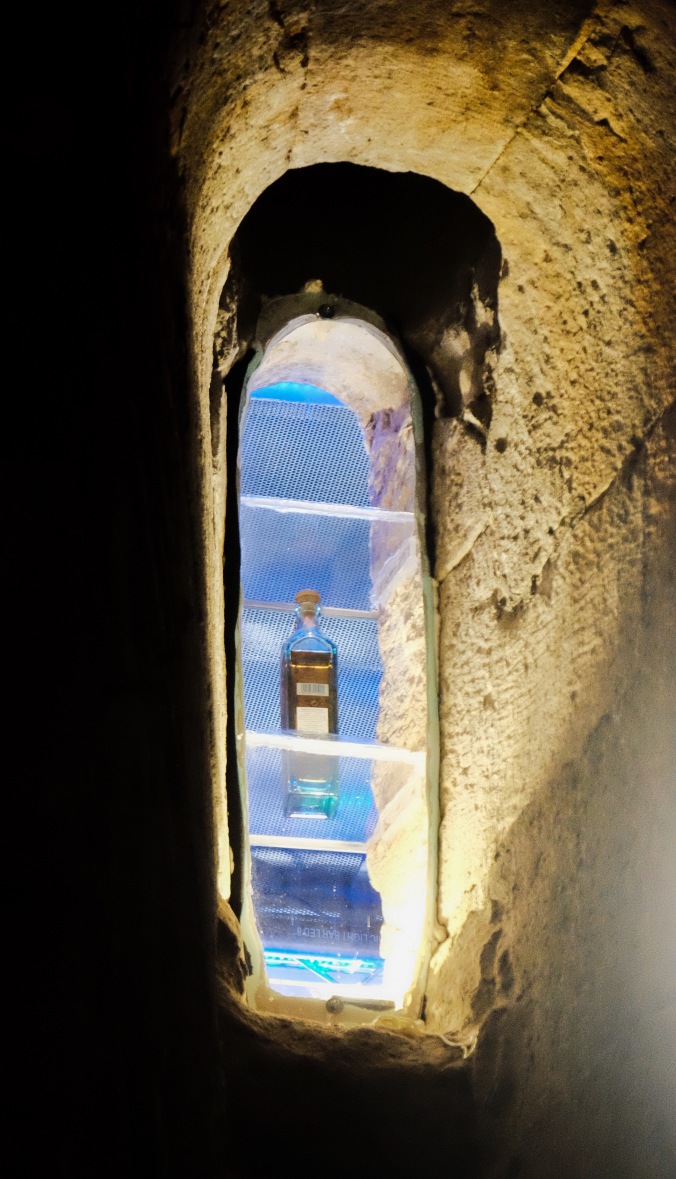 We walked around the palace for quite a while, looking at the ruins from Roman times, as well as the medieval structures that now form the nucleus of the city. 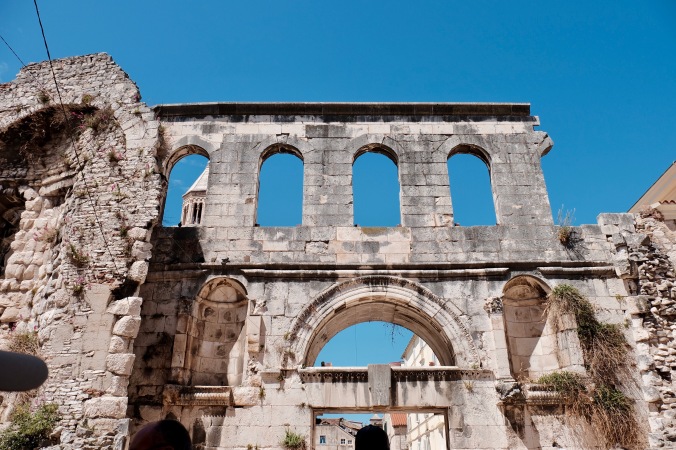 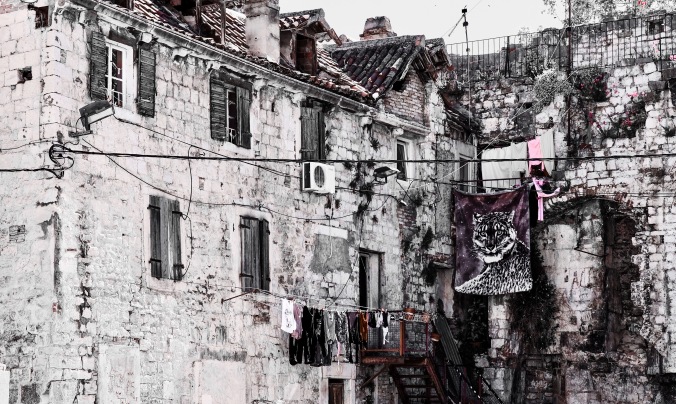 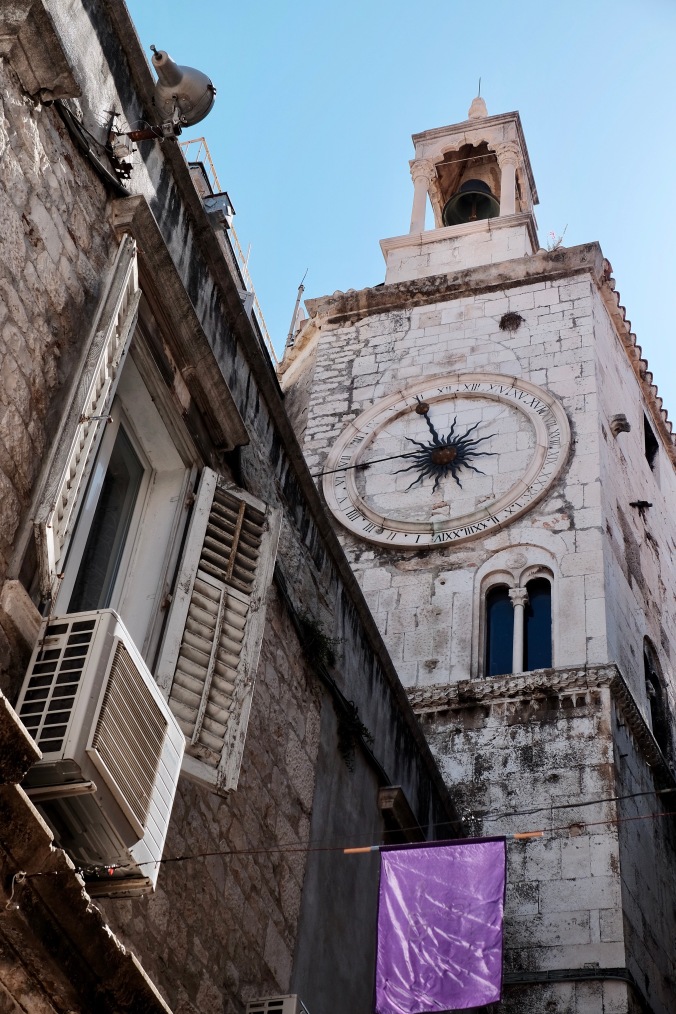 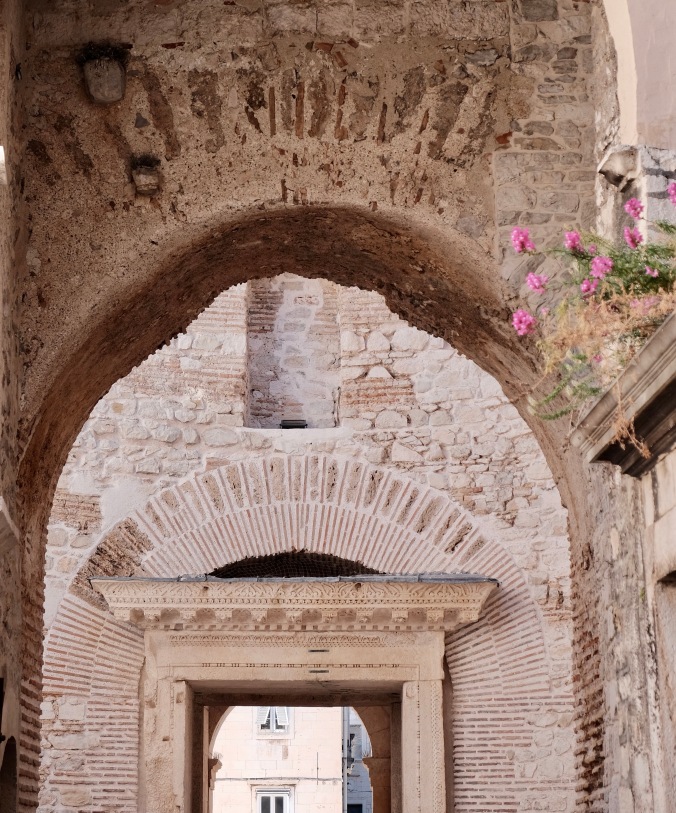 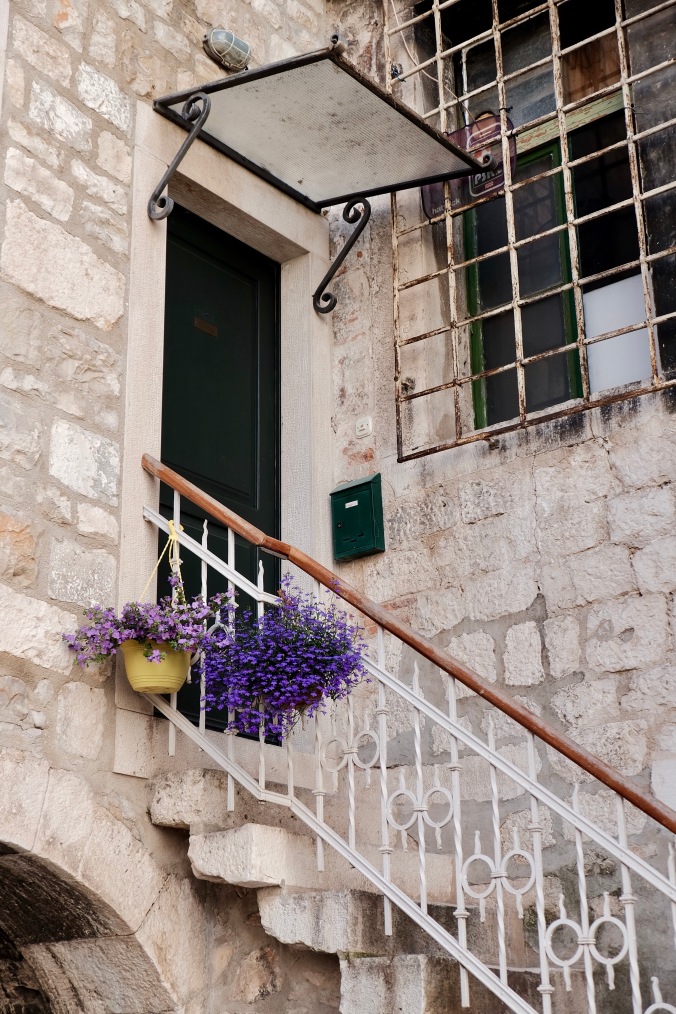 Pusti me da prodjem (Let Me Pass Street) is considered by some to be the narrowest street in the world.

The Peristyle is a bustling, vibrant square filled with tourists, locals, performers, and street vendors. 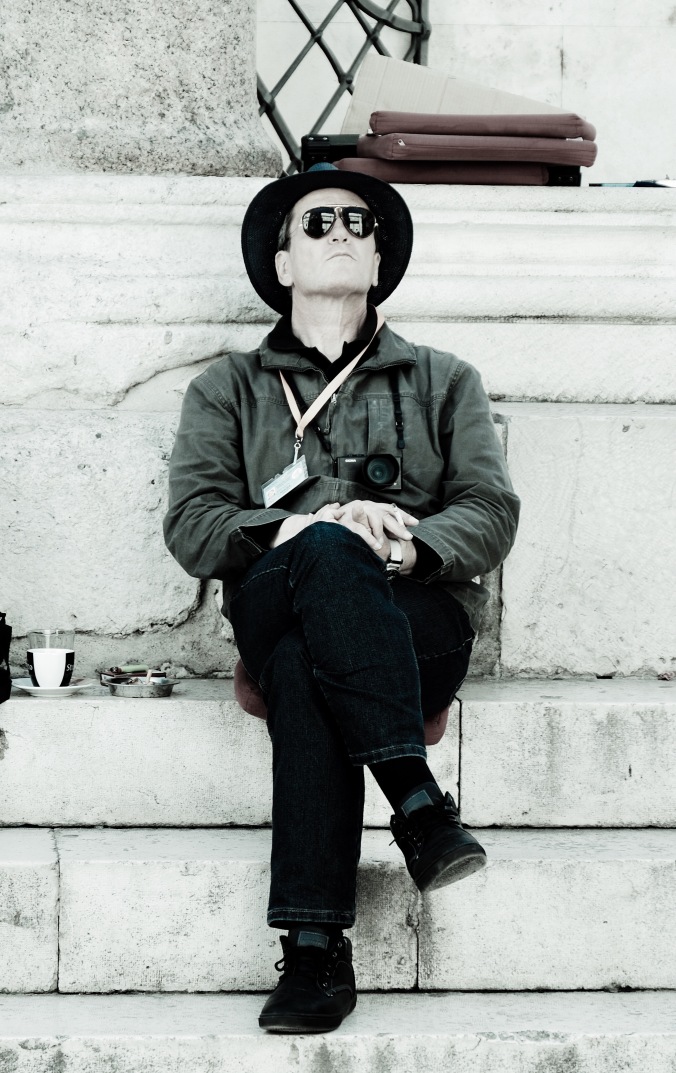 This picture of the Peristyle is from Wikipedia:

One of my favorite areas of the palace was Diocletian’s vestibule, a formerly domed area where today a male a cappella group sings Dalmatian folk songs.

Inside and outside the palace walls one can find busy markets, cafes, and streets filled with tourists and locals alike. 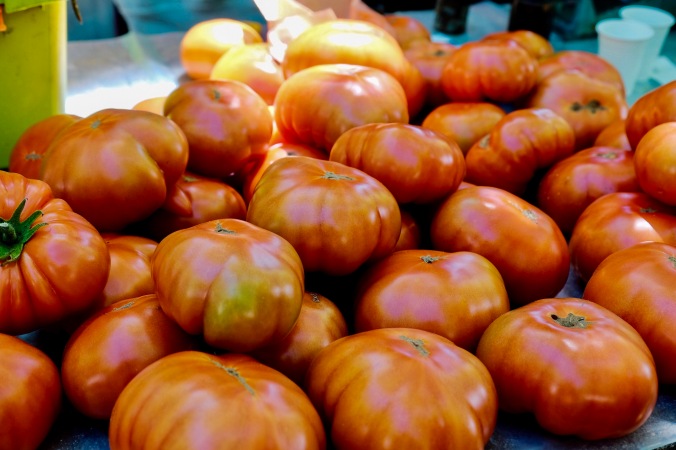 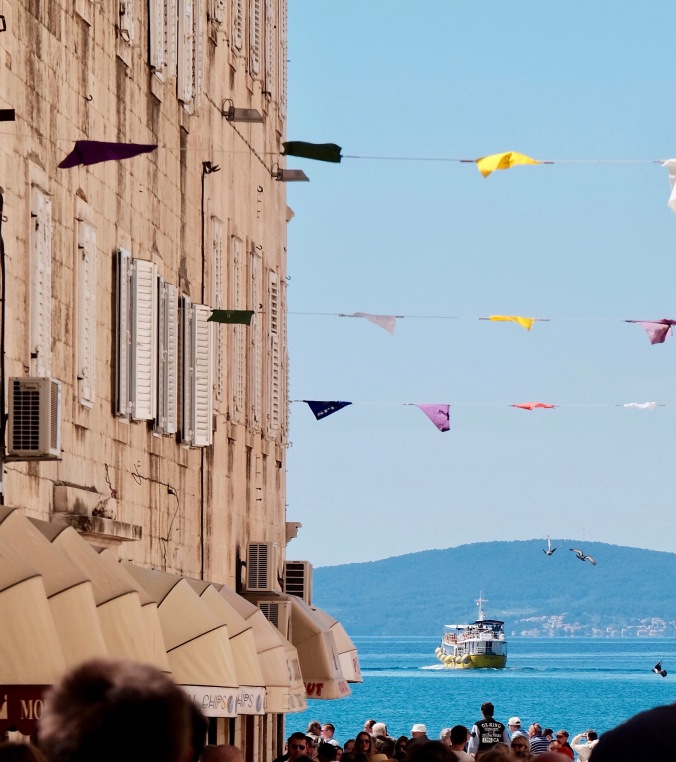 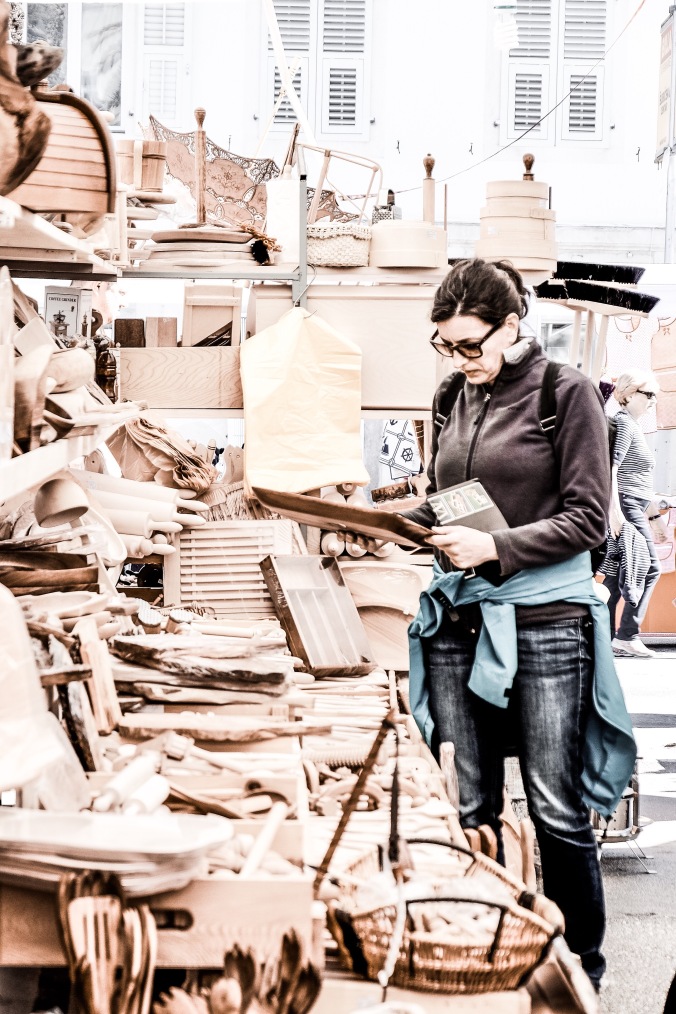 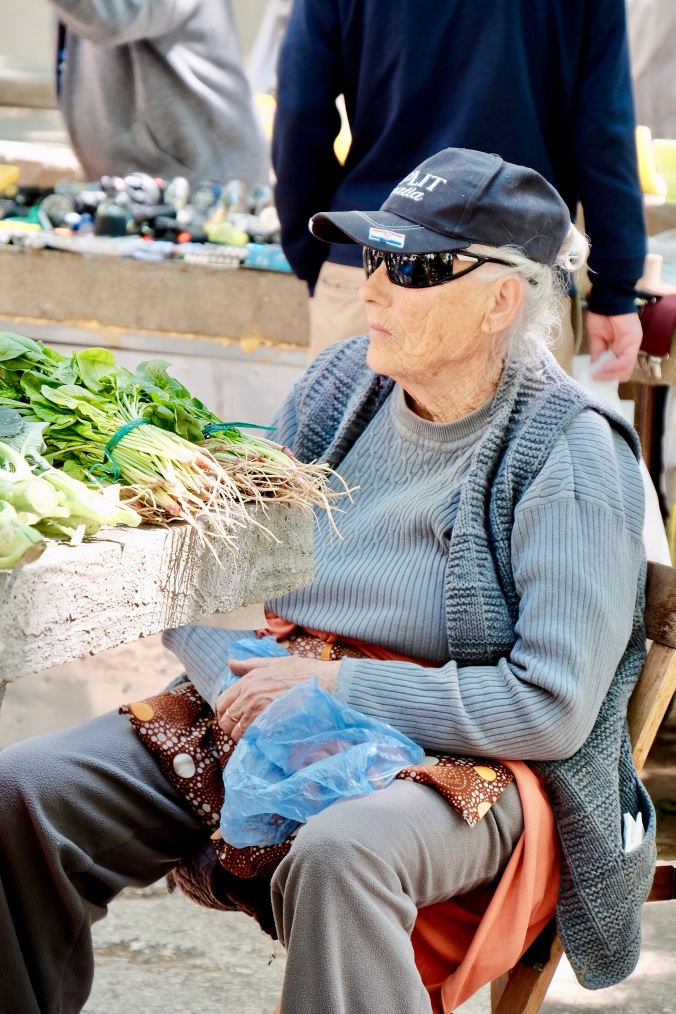 One thing that surprised me, not just in Split but everywhere was the amount of smoking. Would you like some ashes with your fish?😳

Exiting the palace through the Golden Gate in the north wall, one finds an enormous statue of Gregory of Nin (Grgur Ninski), an important religious figure in the history of the Catholic Church in Croatia. 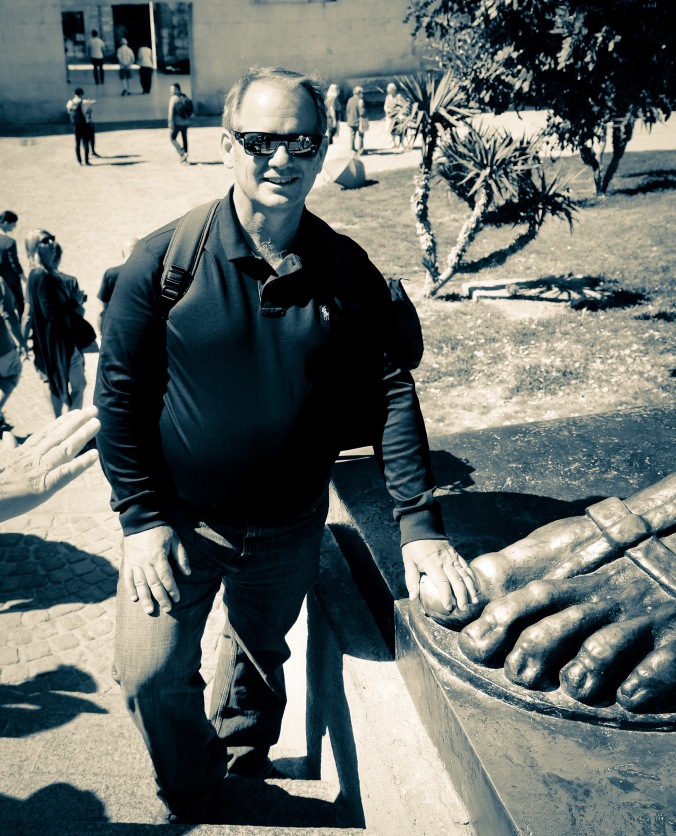 A short walk off the beaten path took us down some narrow streets to our lunch location in a quiet residential neighborhood.

I know it will come as a surprise to you that we were served prosciutto, cheese, bread, olives, and wine for our meal! I always thought of those as being unique to Italy, but I discovered on this trip that the Italian/Venetian influence is very strong across the entire Adriatic coastal region. The other thing on our plate was octopus salad. I have to admit I probably didn’t give it a fair chance. It just didn’t appeal to me! 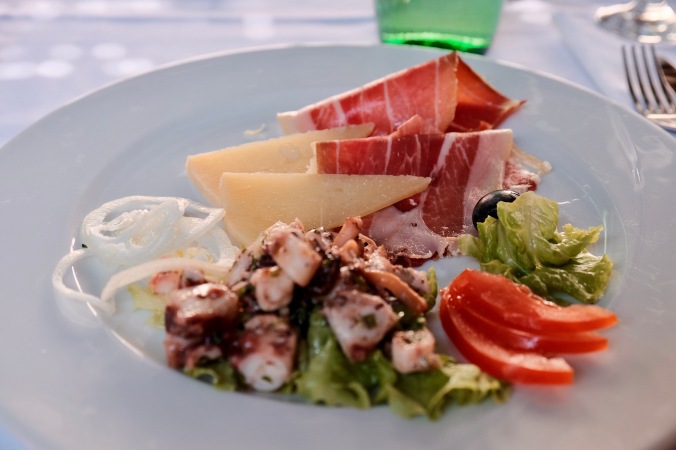 After lunch we were treated to local school children performing on the Riva. 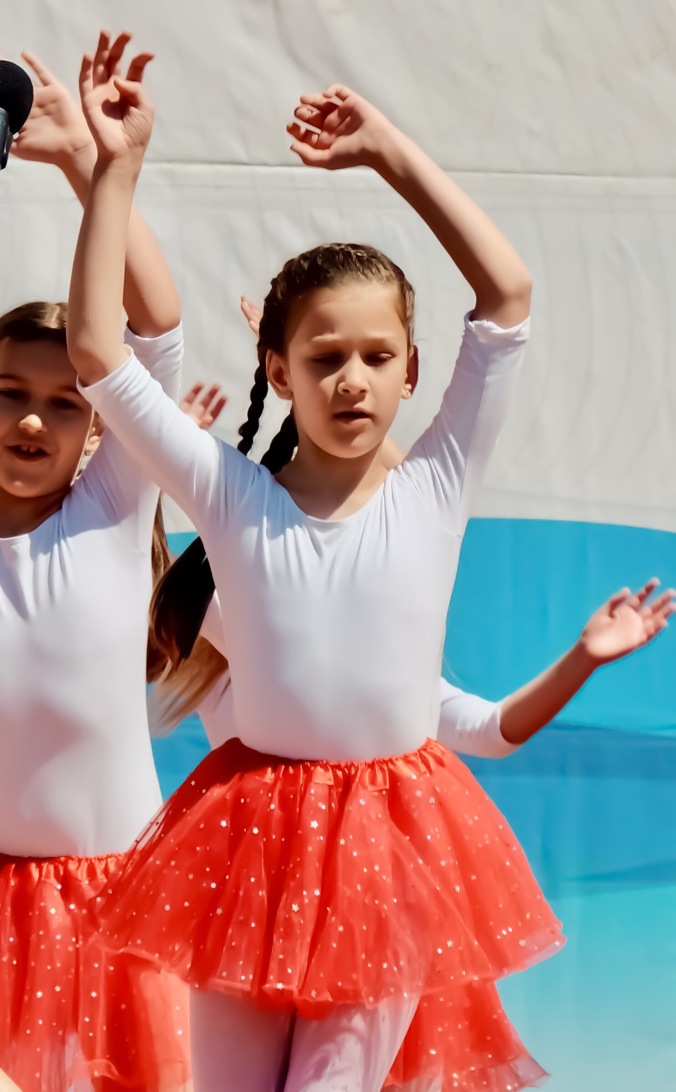 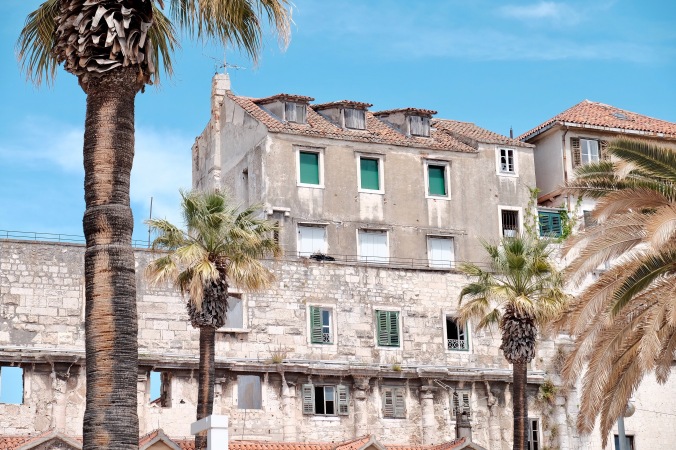 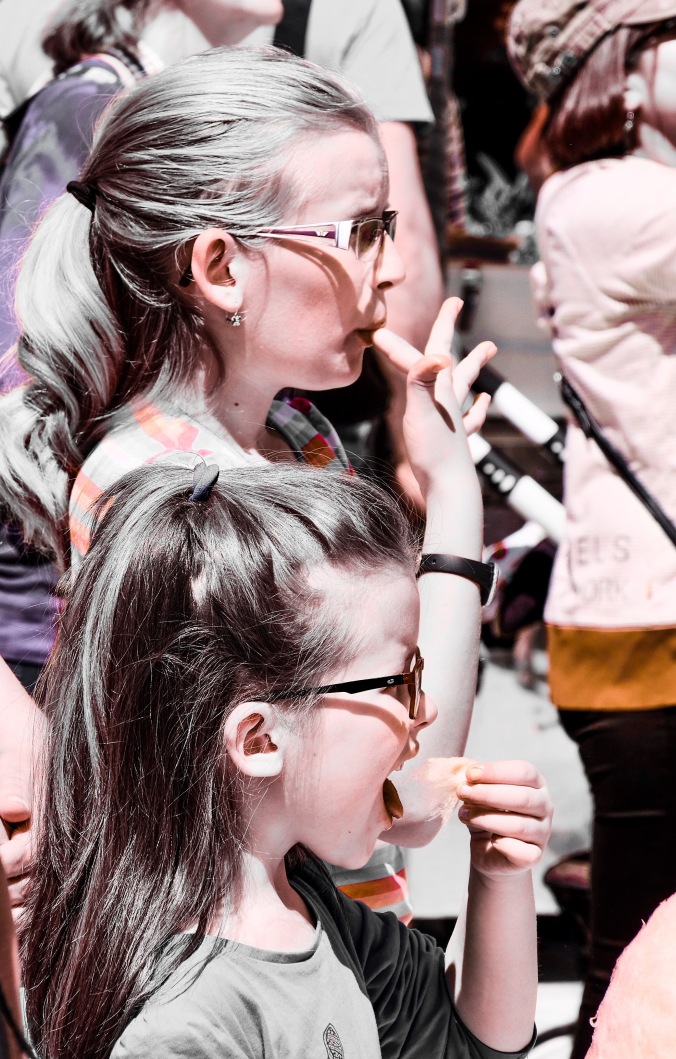 Some more wandering around town brought us to a wonderful Gelato stop and the end of our tour about 2:30. 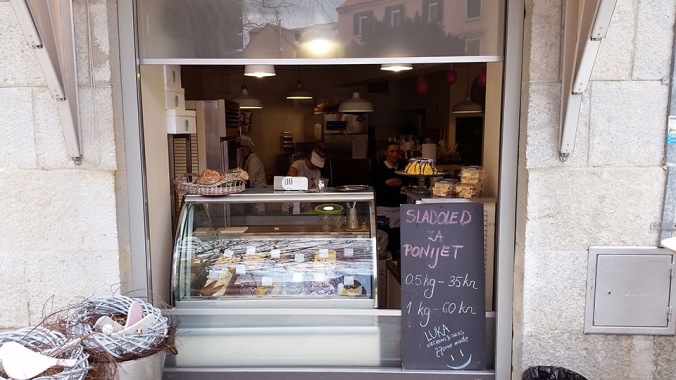 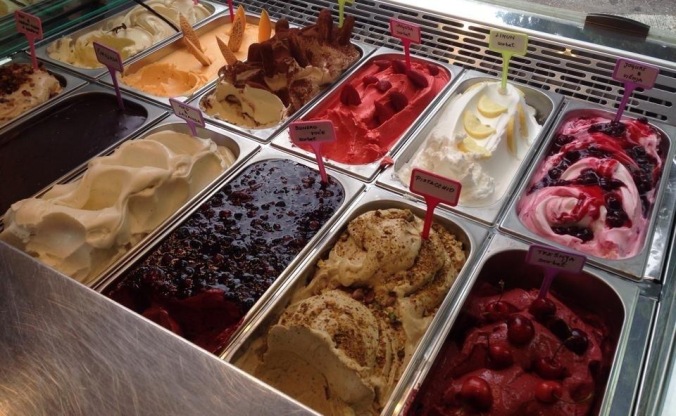 It was a beautiful afternoon, but very crowded and just as in Korcula, the prospect of some relaxation time on our balcony drew us back to the ship. We stayed out there through sailaway, enjoying the abundant sunshine and perfect temperature. 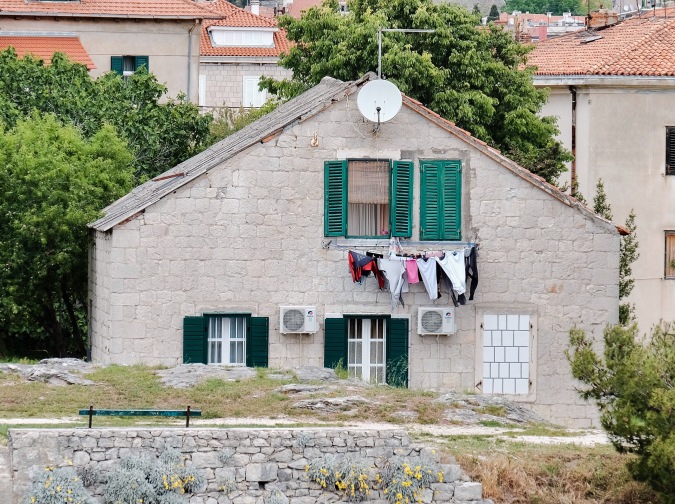 I thought I was done taking pictures and I had gone inside when Jim called me back out to the balcony. He spotted a lady who had just come to her window for a smoke. I’m glad he got me…it’s one of my faves! 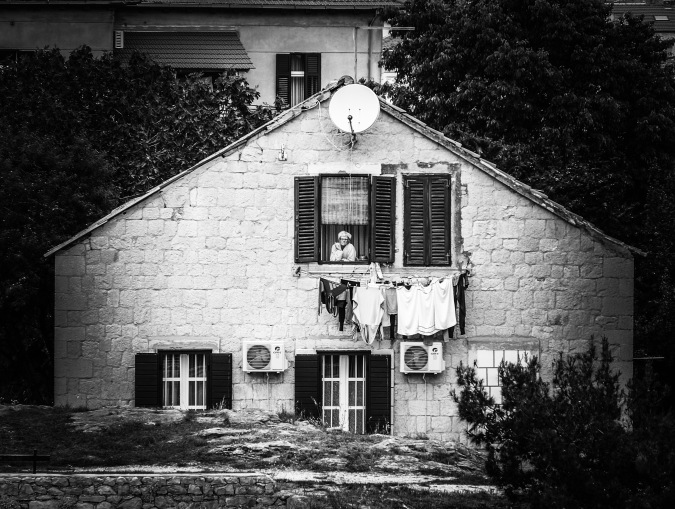 Dinner that night was another Gala evening. We sat at a table for six – this particular group was a little awkward and I was fighting my way through the worst night of my cold.🤒 I absolutely couldn’t keep my eyes open and excused myself from dinner while others were lingering over coffee. I was asleep before Jim even made it upstairs!😴😴