We woke up very early Wednesday morning filled with regret. You are probably wondering what we could possibly have found fault with. After all, we were in Venice in a beautiful hotel, the sun was shining, and life was good! Our issue? We were hot! When we got back to the hotel after Tuesday’s Progressive Dinner we discovered the staff had come in and closed all the shutters. It was stuffy in the room but we thought maybe they had to be closed for a reason, so we left them closed and turned on the a/c. Or I should say we thought we turned on the a/c. Unfortunately we woke up early because it was VERY warm in the room. Come to find out, the Italians prefer it warm, and the hotel’s air conditioning wasn’t yet on for the summer.

So…our regret Wednesday morning was that we didn’t open the windows and get a good night’s sleep! Our other regret was that we were leaving Venice too soon, but we had places to go and a friend to see! After all, going to Ljubljana and visiting our friend Marjan were the reasons we chose this cruise!

On Wednesday morning we got packed up and walked to the Jewish ghetto with Lisa and Fred. 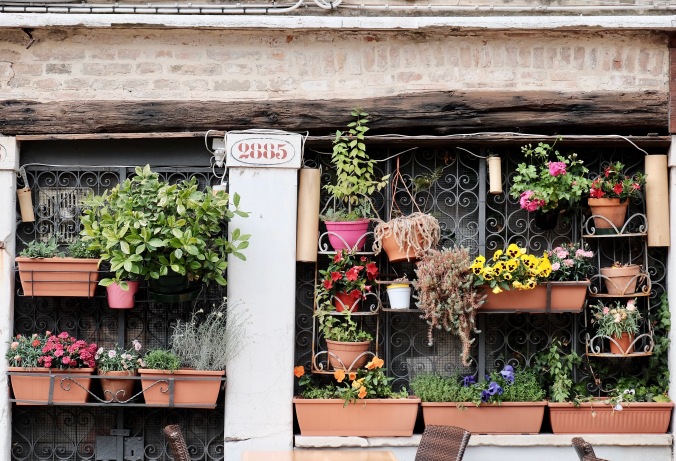 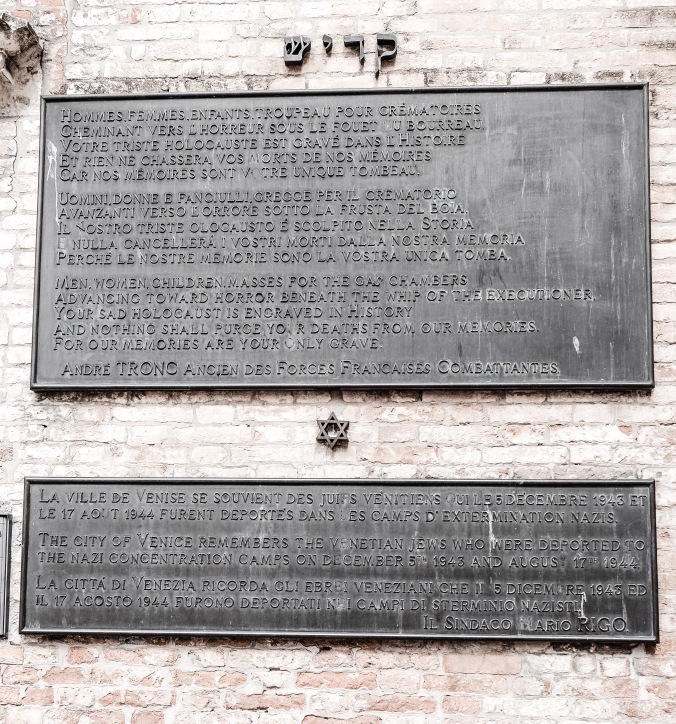 Unfortunately we did not have enough time to visit the museum and take the tour but we did enjoy seeing the ghetto and another part of Venice. As much as we hated to, we said our good-byes to Fred and Lisa😢, and walked back towards the hotel.

When we left the ghetto, we walked back down towards Rialto to take a look at a shirt I had seen in a shop window. Alas I discovered it only came in extra small so that ruled me out!😂😜🙄

I have to say something about finding that shop. I had seen the shirt in a window as we passed by on our food tour Tuesday night. By Wednesday morning I was starting to get my bearings and a sense of direction and I thought I could find the place again. Jim thought I was crazy! I think he was convinced that we were going to get totally lost and miss our water taxi pick up. He was amazed when I walked straight to the store with no wrong turns. After almost 30 years he should know that when I’m  looking for something I want to buy I can find my way with no problems! 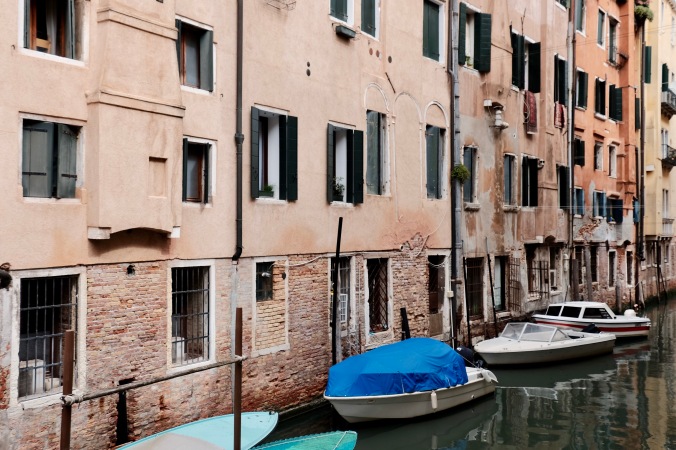 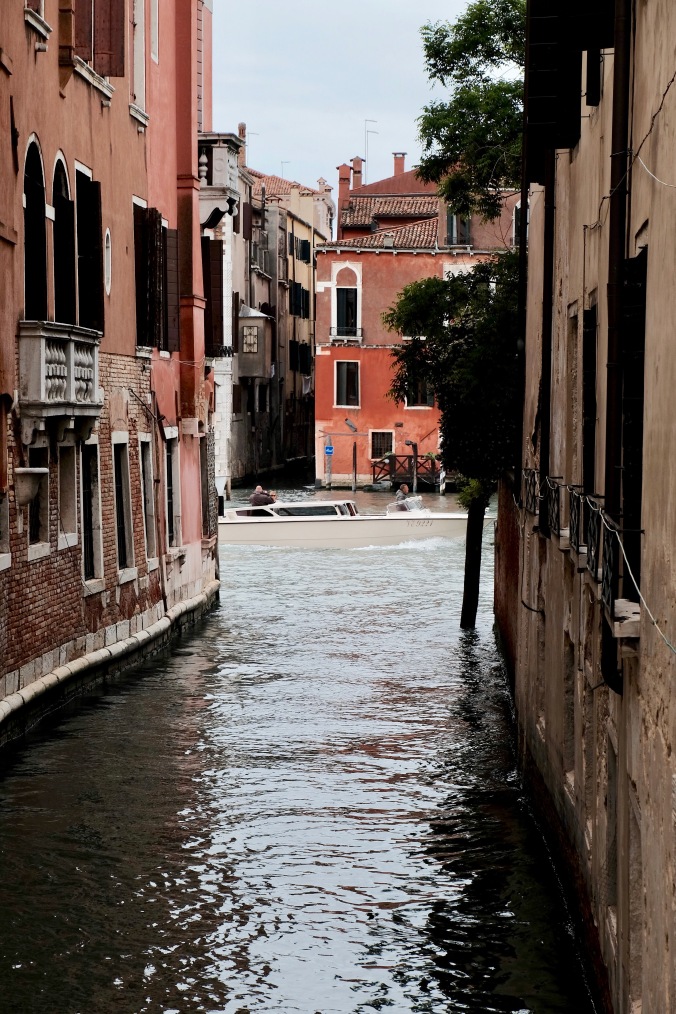 We bought street food for lunch (pizza and pastries) and settled down on some steps by a canal for lunch. It would have been really enjoyable if I hadn’t had to defend my territory and my food from the pigeons!

Once we finished lunch it was time to say goodbye to Venice. Our water taxi picked us up at the hotel’s private dock and took us to Piazalle Roma to meet our driver for Ljubljana. 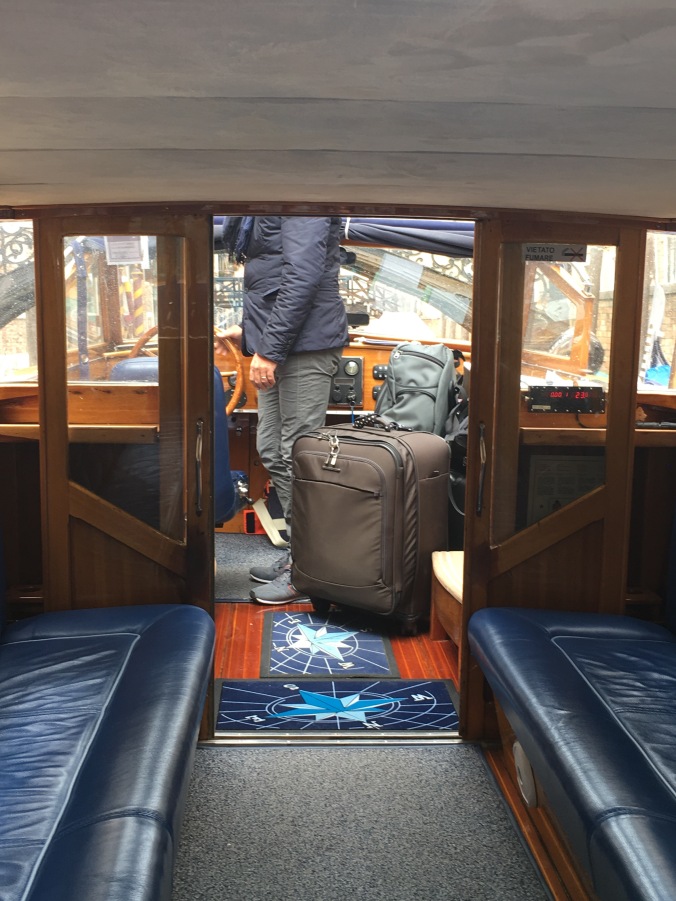 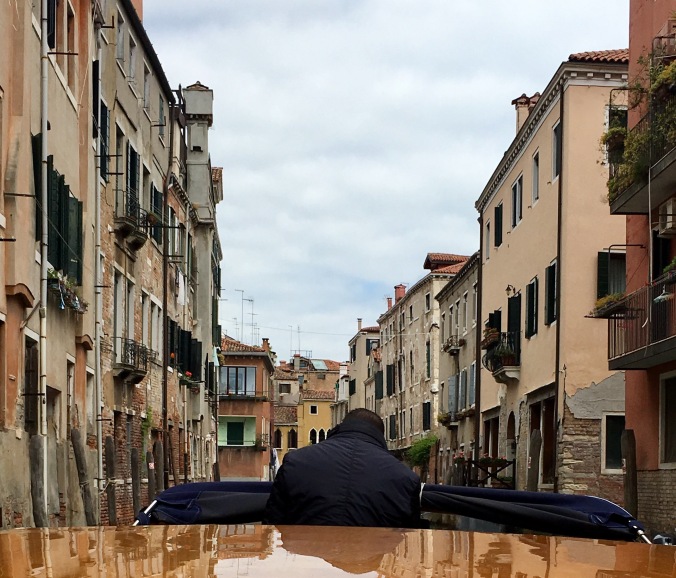 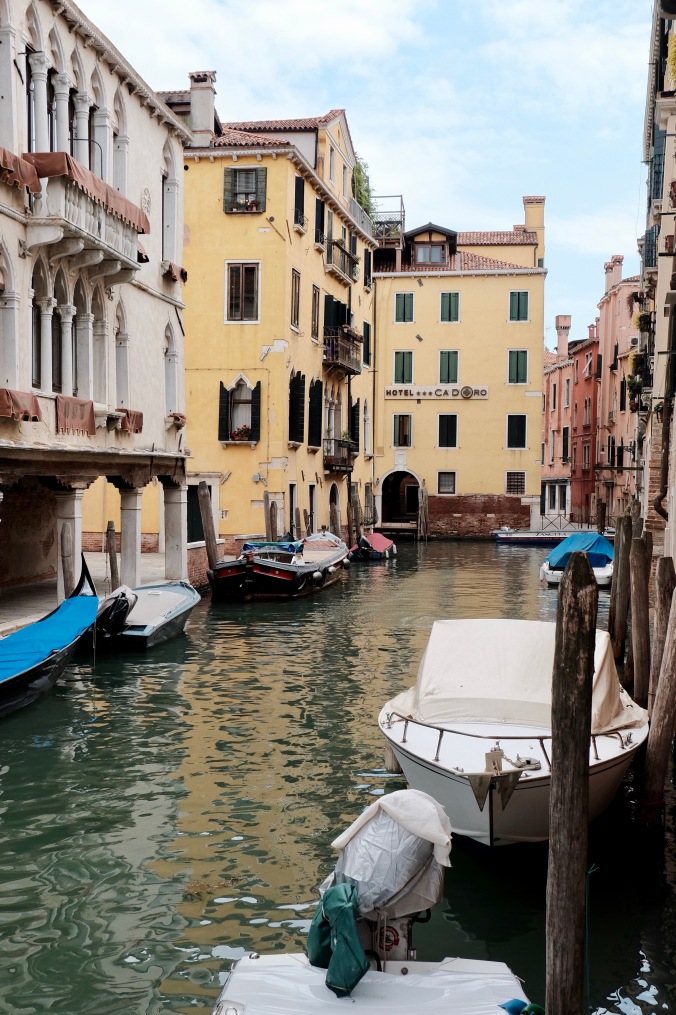 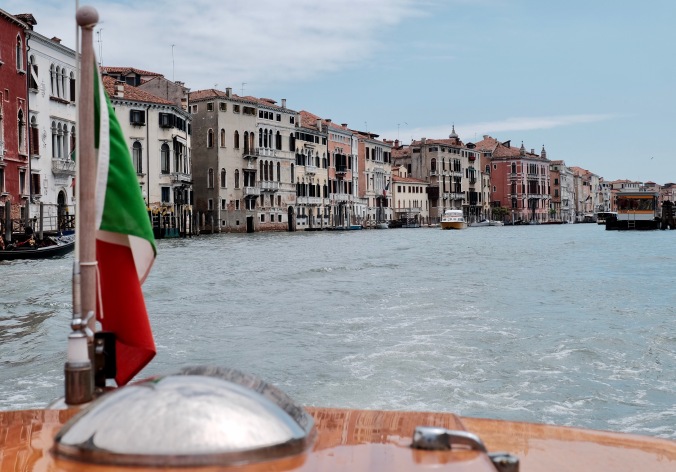 Not sure why anybody would choose this in Venice, but there were people there! 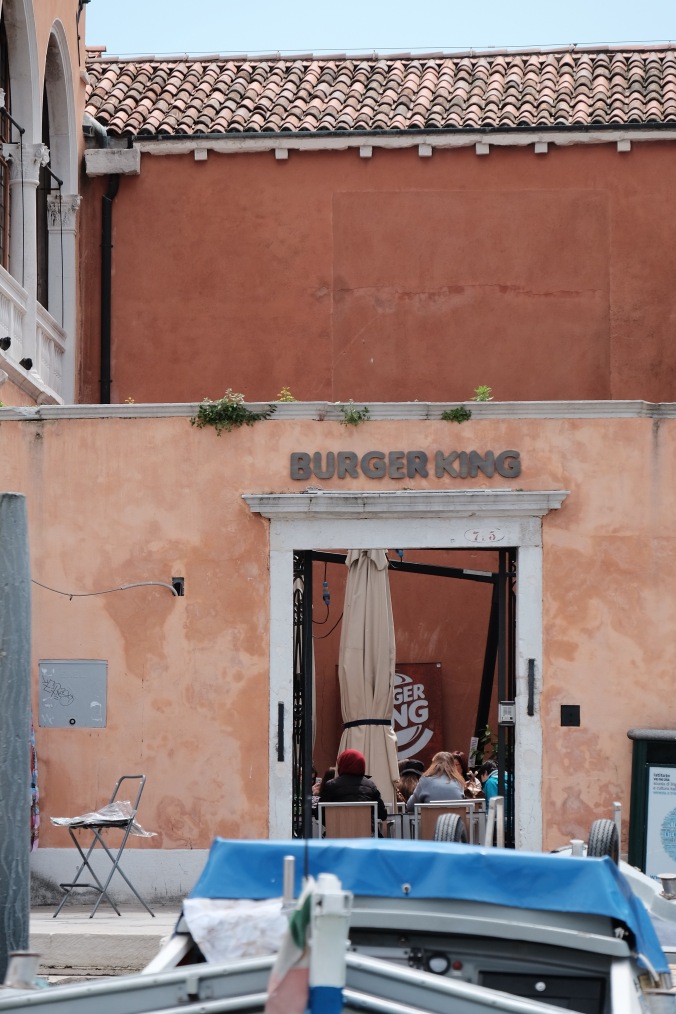 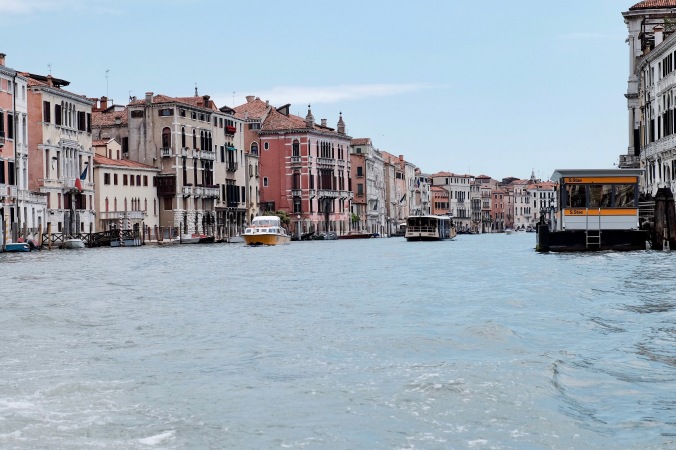 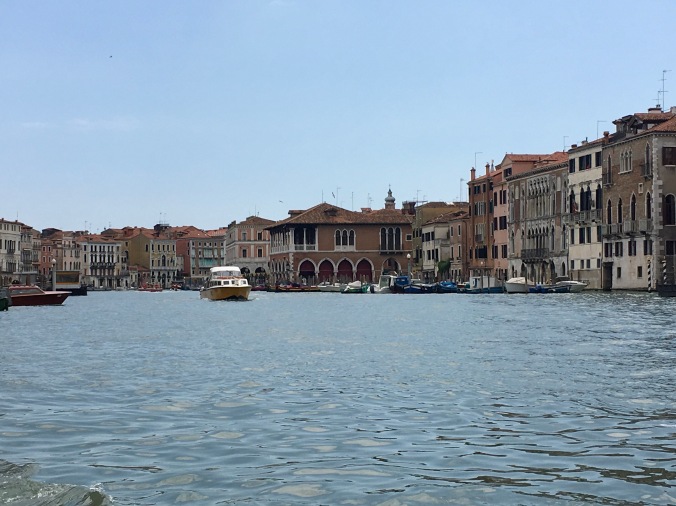 Not what I usually think of when I think of a funeral procession! The canals are truly the streets of Venice!

We chose a company called Day Trip for our transportation from Venice to Ljubljana, and used them again on Friday from Ljubljana to Zagreb, Croatia. Because car access to Venice is so limited we had arranged to meet our driver at Piazalle Roma. Unfortunately our driver did not have a sign with our name on it, and since we didn’t know what type of vehicle he was driving it took a little while to meet up. We were beginning to worry, but we did eventually connect.

The drive to Ljubljana was uneventful, but honestly our driver was a little too chatty for my liking. The Slovenian roads were excellent, and the motion of the car was lulling me to sleep. Much to my dismay every time I dozed off coincided with the time our driver wanted to talk. About politics.😝 Specifically, he wanted to know what I thought about Trump. He also wanted to know why I thought he got elected. I don’t know about you, but the very last thing I wanted to do on my European vacation was think about the state of American politics!

We stayed at the Hotel Adora in Ljubljana. It was a very nice, recently refurbished hotel, and we had a deluxe room on the top floor. Fortunately there was an elevator, because the stairs look like something you would find in Amsterdam. They were more like climbing a ladder than climbing stairs! We thought the hotel was comfortable with pretty, modernized facilities and a friendly staff. It served it’s purpose although we would probably not stay there again. Even though the hotel is located in the pedestrian zone, it is right on the edge of the walking area and next-door to a very busy street so it was noisy with the windows open. Just like in Venice, the hotel’s a/c wasn’t on yet so that wasn’t an option.

For some reason, I didn’t take pictures of the hotel. Kind of strange for someone who takes pictures of absolutely everything! These were taken from the hotel’s website: 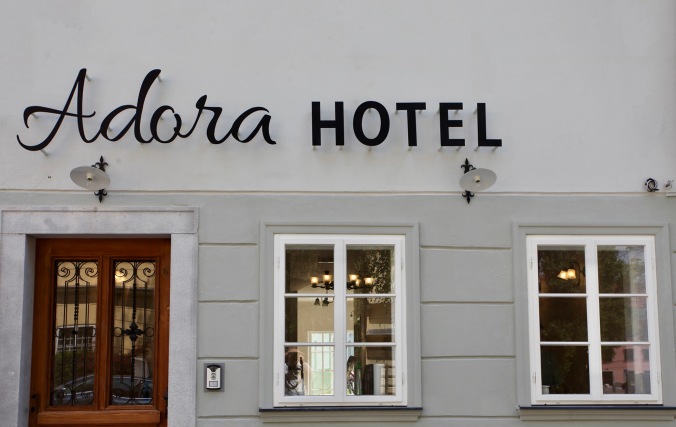 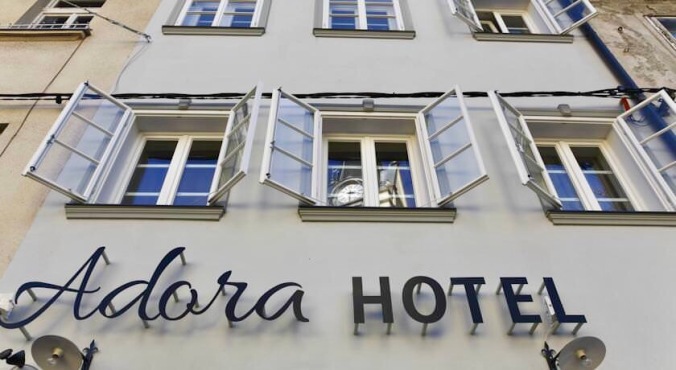 The view from our window: 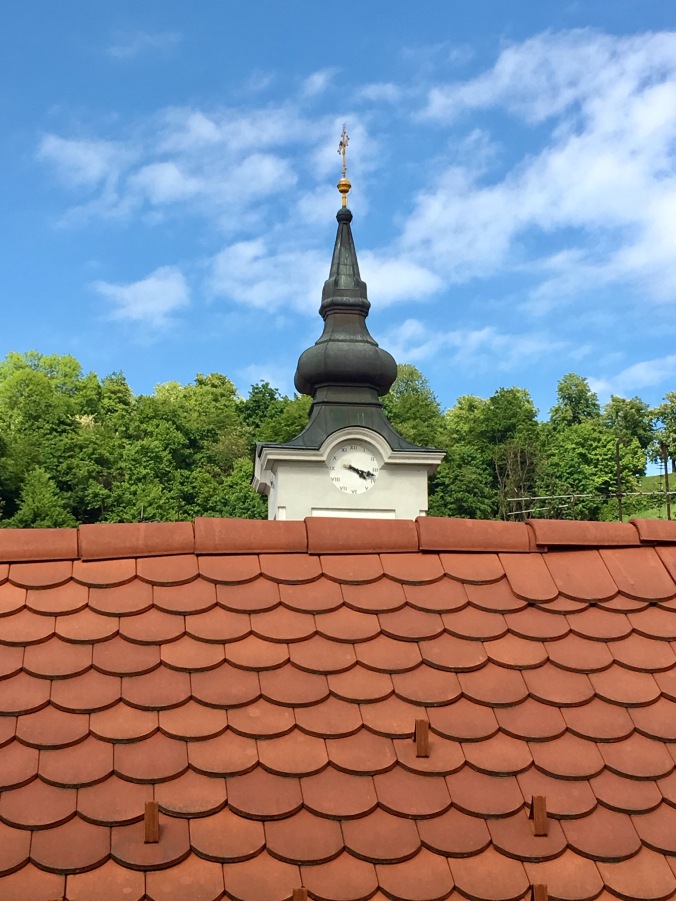 Our friend Marjan came and picked us up shortly after we arrived, and we walked around the center of town for a little while.

We didn’t have a lot of time because we had booked a food tour with Roundabout Travel for the evening. We made plans with Marjan for an epic tour the next day, and we were off to meet our food and wine guide!🥖🥂🍕🍷

Slovenia has been influenced by many different cultures, and the regions and traditional dishes of Slovenia were the focus of our food tour. 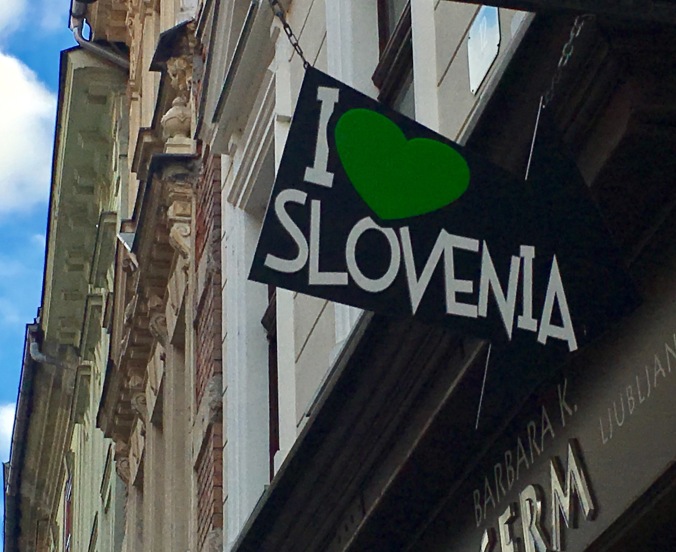 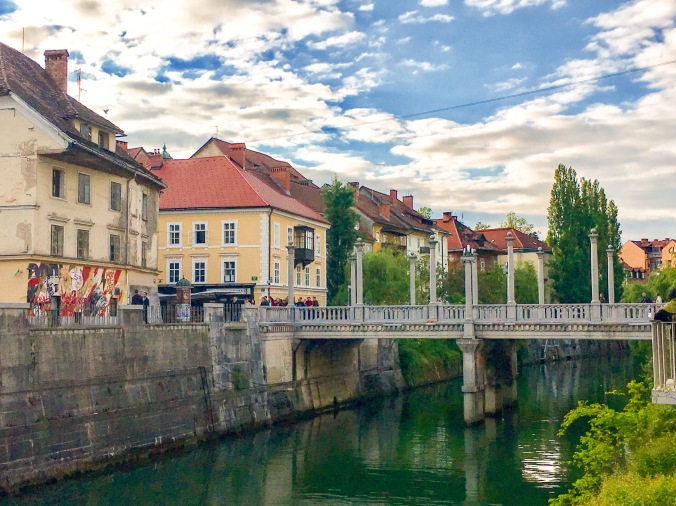 Our first stop was at Gujzina where we had Bujita Repa, a turnip stew with millet and pork.😳 If you think that sounds nasty I did too, but when I tasted it I found it to be delicious! This is a traditional dish in Prekmurje, which is in the north eastern part of Slovenia. 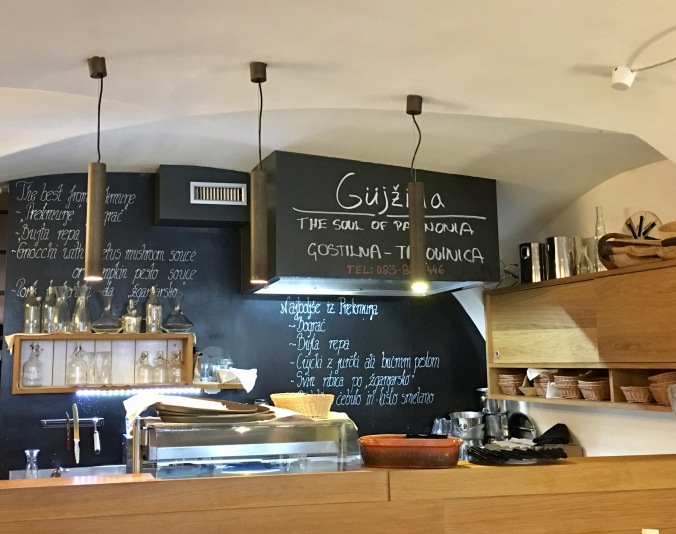 We made a quick stop at Piranske Soline, the salt shop so we could taste some salted dark chocolate. Yum! 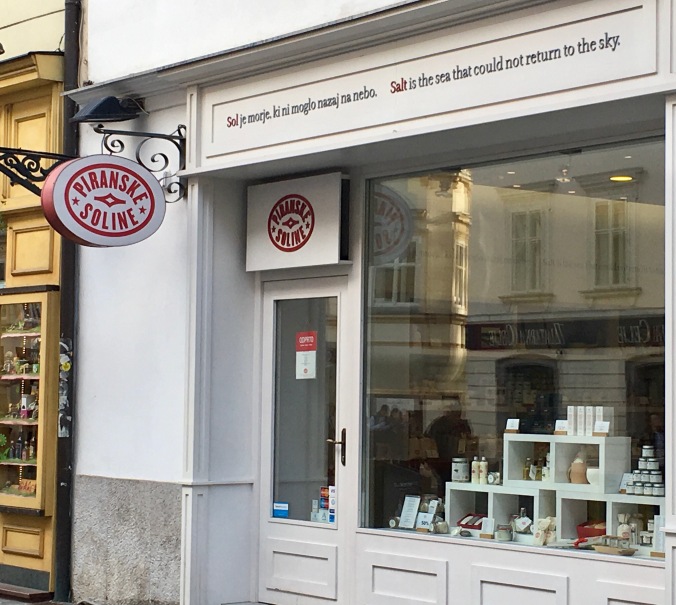 Our second stop was at a restaurant called Druga Violina. I thought this was an especially interesting restaurant because in addition to excellent food one of their missions is to provide work opportunities for mentally and physically handicapped teenagers and young adults.

We had two dishes at this restaurant. The first was Zlikrofi (dumplings) filled with mashed potatoes and mushroom sauce, and the second was Shtruklji which is rolled pastry filled with cottage cheese and sprinkled with bread crumbs, butter, and sugar. Zilkrofi and Shtruklji are traditional Slovenian dishes that come from Idrija in western Slovenia. Both were very good, but I could have made a meal out of the dumplings with potatoes and mushroom sauce! We also tasted some Shtruklji that were made from buckwheat flour and topped with with walnuts. I thought the buckwheat flour was a little overwhelming, but perhaps it’s just because it’s not a taste that I am accustomed to. 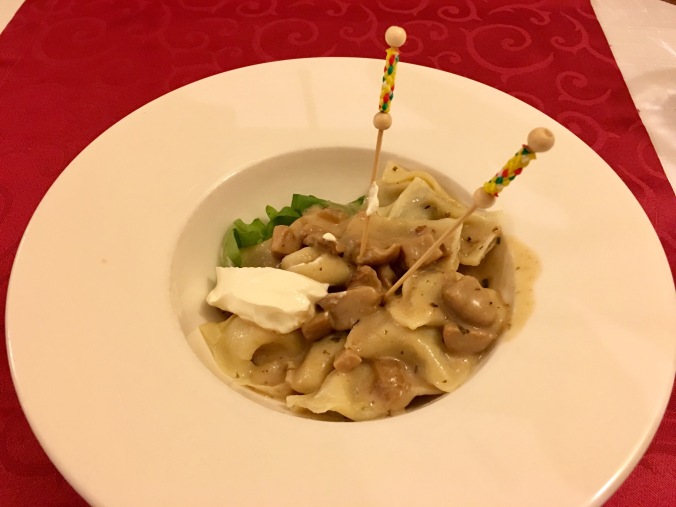 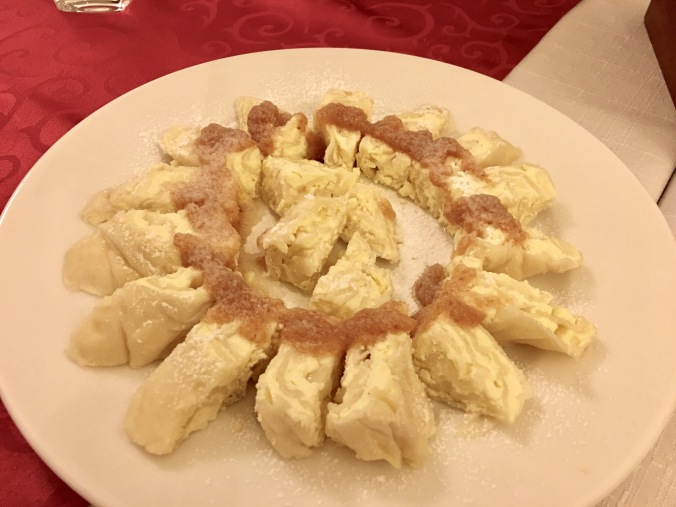 A walk through town brought us to our third stop, Klobasarna, for some excellent Carniola sausage. This sausage, also known as Kranjska Klobasa is similar to Polish sausage. It is served with fresh horseradish and hot spicy mustard, but I thought it was delicious on its own. The sausage is from the Carniola region of Slovenia which used to be part of the Austrian empire. 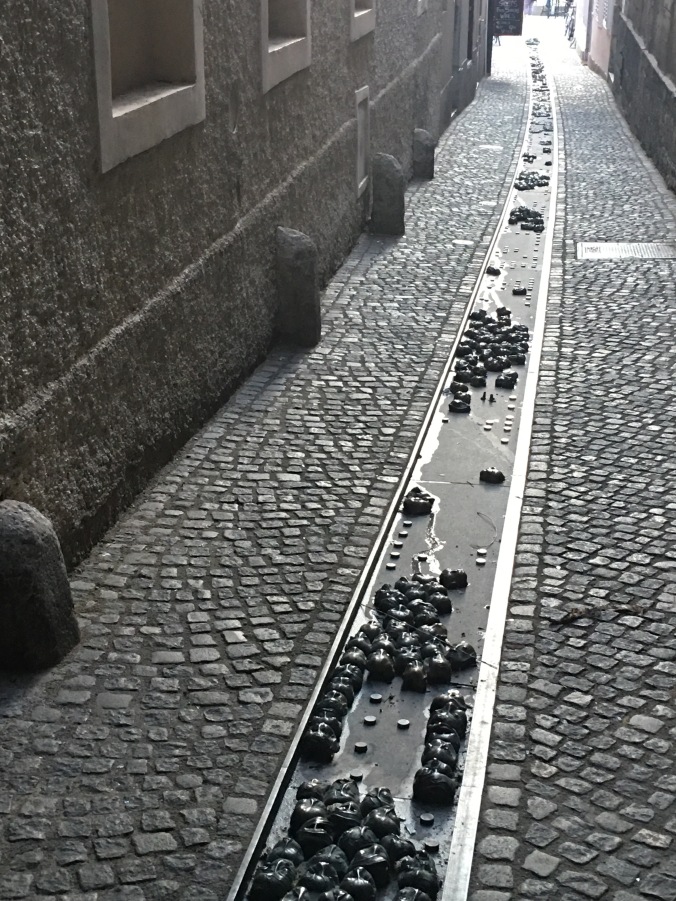 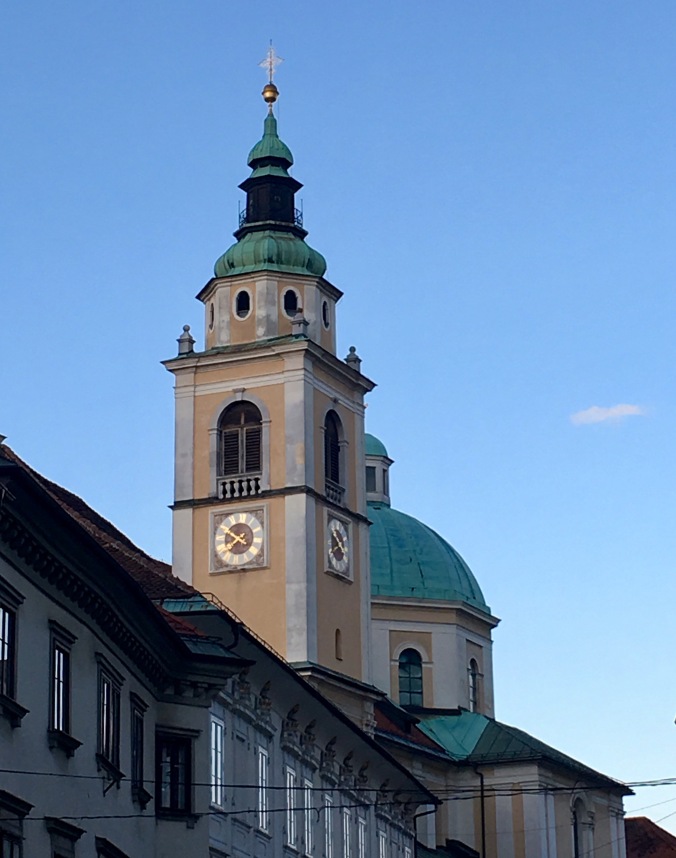 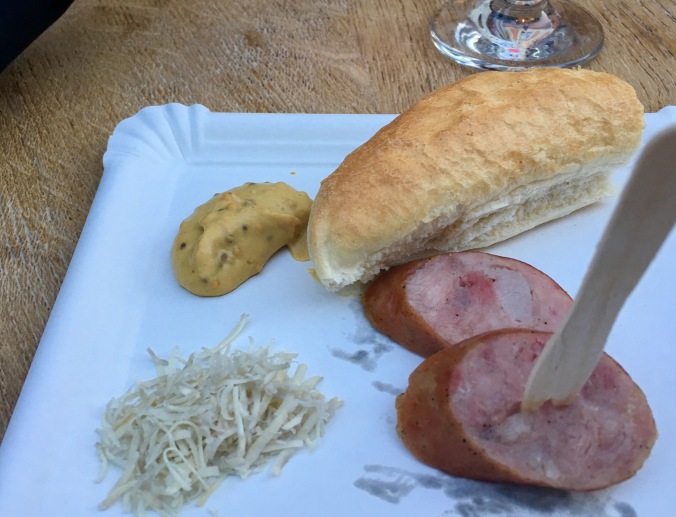 I know I’m not always the most adventurous when it comes to food, but I will usually try anything once. Stop number four at a restaurant called Ribarnica proved to be the exception to that. It was our fish stop, and I could smell the restaurant long before we arrived!😳 I found the strong smell of fish 🐠🐟🐠 at this stop overwhelming and it really turned me off even sampling the food. We were served large platters of sardines and Adriatic squids, but I didn’t taste either one. I was happy to leave that stop and move on to the next which was much more to my liking! 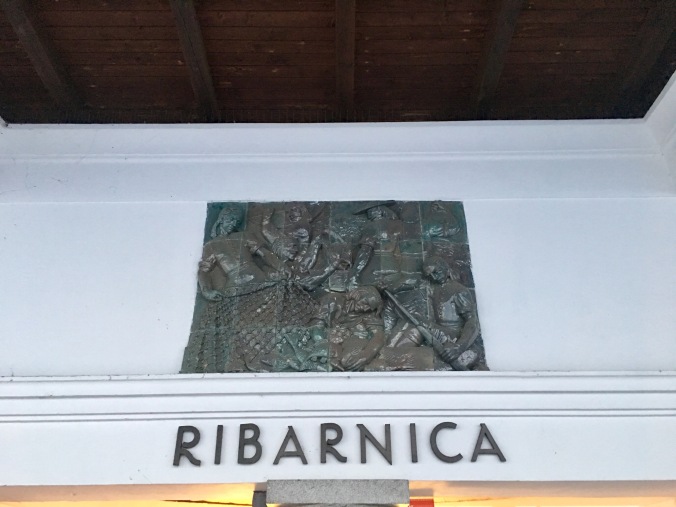 Our fifth stop was in the wine room at the Royal Hotel, where we were served prosciutto with large chunks of white bread and some Teran wine from coastal Karst. This limestone plateau (also known as the Karst) extends across southwestern Slovenia and northeastern Italy. The cultural influences in the region are heavily Italian, and as we would see the next day, the terrain looks much like Tuscany. The Karst region is also where many of Slovenia’s spectacular limestone caves are located. 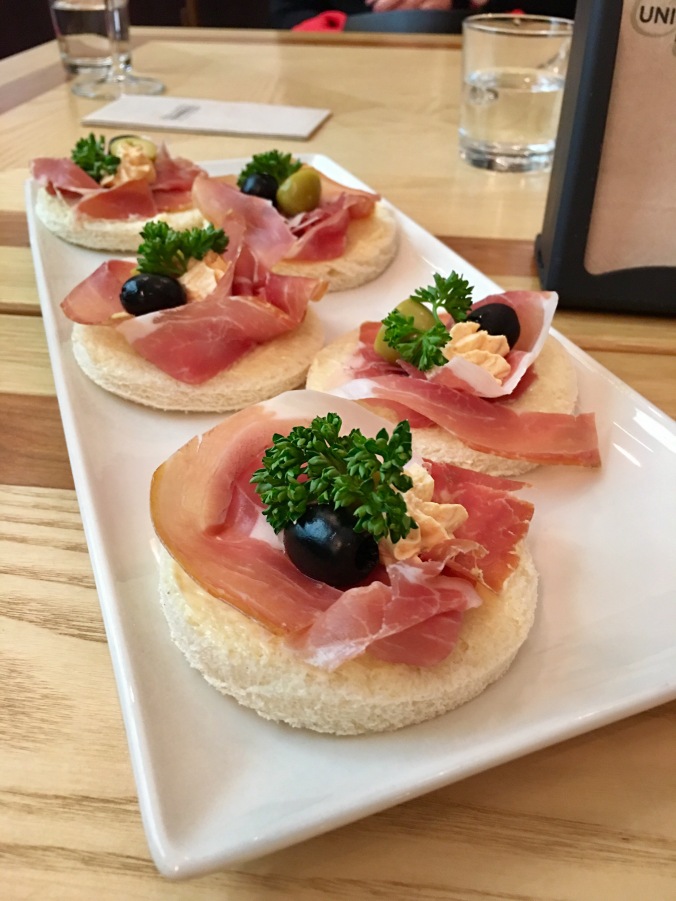 Our sixth and final stop of the evening was on the top floor of Nebotičnik, Ljubljana’s first “skyscraper”.  We were treated to a piece of Prekmurska Gibanica, a traditional Slovenian layered pastry from Prekmurje. Prekmurje is the easternmost area of Slovenia, bordering Hungary, and the cultural/culinary influences are Hungarian.

The dessert is made up of several layers of pastry. Between the layers of pastry are poppy seeds, walnuts, apples, raisins, and quark (think whipped cream). I thought dessert was delicious! I must have been very tired, because I didn’t take any pictures of dessert. Here are a couple I found by doing a web search: 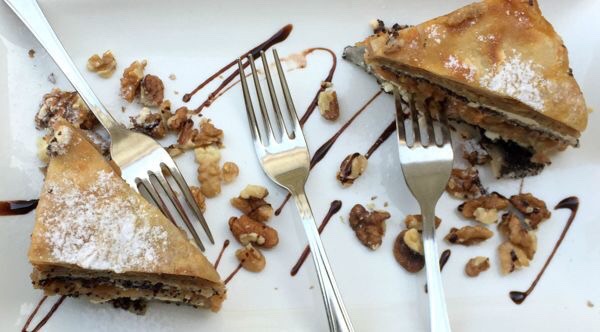 This was a very interesting tour with lots of history and a good variety of food. Our guide Tina was wonderful…very knowledgeable and attentive to all the guests.

I thought both tours we did through Roundabout Travel had top-quality guides and good itineraries. I admit, this tour did get a little long for me towards the end. I was feeling the cumulative effects of nine super busy days in a row without a break, topped off with a hot, restless sleep Tuesday. We got back to the hotel around 10:45, and I think I was probably asleep by 11:00!😴

Only two days of fun left, then our airport hotel😧 and long trip home!✈️

One thought on “ The Reason We Came…”